“If you have time, confidence, and energy for no other cooking endeavor on a regular basis, focus on the salad.”
—Judy Rodgers

[F]ollowers of my Facebook status may be aware that I braised a pork shoulder this weekend. In Coca-Cola. So why, then, an entire post about salad? Why waste everyone’s time? The short answer is that in This Household, you have to have your vegetables before meat or dessert. All kidding aside, isn’t that how many of us were brought up? OK, we Asians may have gotten a slightly different message (“If you’re not hungry, then just eat the meat”). But we seem to be told, over and over again, that salads aren’t eaten for pleasure. They’re eaten for nutrition, losing weight, “being good,” or whatever other guilt-inducing reason. As a result, the ability to make a good salad continues to be shockingly underrated. Think about the typical family restaurant in your neighborhood. What does the “side salad” look like? It’s often leathery, wilted iceberg or romaine lettuce; pink, mealy tomatoes; sliced cucumbers; and your “choice” of thousand island, french, blue or ranch dressing from a jar. Not that any of these ingredients itself needs to be terrible (OK, the dressings are terrible). But they are so often thrown together in an uninspired, thoughtless and unappetizing way. So what do you do? If you’re like most normal people, you throw it away. If you want to be good to your body, you choke it down. Have you ever thought about how ridiculous this is? Is this why you came to the restaurant to begin with? To suck-it-up/choke-it-down/take-one-for-the-team? For chrissake, you’re paying someone to make you a salad. That thing better be goddamned delicious! Similarly, if you’re going to go through the effort to make yourself a salad, why not make something that you’re not just willing, but excited to eat? The answer, for me, for most of life, was that I didn’t know any better.

I’ve said it before, and I’ll probably say it again: Next to my sister, the person from whom I’ve learned the most about cooking is Judy Rodgers, via her informative and superbly written Zuni Café Cookbook. In it, Rodgers describes, in eloquent, anal-retentive detail, how to make great salad. The book has turned my wife, the unlikeliest of herbivores, into a salad-lover. For Erin, the revelation was proportion. She previously thought that she hated salads because the dressing was, by definition or necessity, too sour. Truck out your ancient bottle of Paul Newman vinaigrette (or virtually any other brand, for that matter), and you’ll see what I mean. Mouth-puckeringly sour. And it makes perfect sense that this would be the case. People hate salad. That dressing’s going to be in the fridge for years. So how do you make sure the dressing doesn’t spoil? Bring its pH down to point where nothing could possibly survive in it. They’ll definitely be happier with that. Unfortunately (for your tongue), there is such a thing as too much acid, particularly when that acid is white vinegar. Enter Rodgers. We learn that by using a lighter touch, and a trusty 4:1 ratio of oil to acid, salads suddenly become infinitely more palatable. Interested? Almost? Stay with me. I’ll do my best to convince you further.

I work in the Mission Bay neighborhood of San Francisco. There still isn’t much here (except for nonstop construction), but there are oases of foodie-dom, particularly in the nearby, possibly-still-up-and-coming Dogpatch. I’ve walked past an inviting restaurant called Piccinomany times, and have been consistently struck by how gorgeous the salads are. People who know me are generally aware that I’m a big meat guy. But I appreciate a beautiful plate when I see it, even if it “just” has plants. So I finally ate there, managed to not try their signature, thin-crust pizza, and was absolutely blown away by a spinach salad. I actually didn’t remember a ton about it, except that I couldn’t place some of the flavors. So I looked it up:

I thought, OK, I know most of this stuff. But do they carry truffles at my neighborhood grocery? Well actually, yes … But I thought that it would be a tad obnoxious to suggest to you a recipe that includes any ingredients costing more than $1000 per pound. So I set out to make my own version of the salad.

Choosing and washing the greens I prefer to buy bunch spinach, because it’s much easier for me to judge its freshness. If I see significant discoloration of the leaves, I can induce that the whole bundle/head is no good. My mom says that it’s a good sign when there’s a reddish tinge on the stems near the root end, so I look for that, too. For this salad, I like spinach with slightly larger leaves and a firmer texture than baby spinach, but not so firm that the stems are tough. Cut off the stems and discard any wilted, damaged, or discolored leaves. Add the “good” leaves to a large bowl of cold water and gently swish around, changing the water until it remains clean. Gently spin dry, taking care not to bruise the leaves.

Making the dressing This vinaigrette is a classic dressing, but I got my proportions from Deborah Madison’s Vegetarian Cooking for Everyone. I wanted to explore a couple different oils and three different vinegars for this dressing. So I geeked out and screened a 2 x 3 matrix of small dressing batches. I tried almond oil, because several friends and family are allergic to tree nuts. But as I feared, it lacked the richness of the walnut oil, which I thought was crucial to this recipe. I also tried mixing almond oil with olive oil. This held up better than almond oil alone, but didn’t taste very almond-ey to me. Sorry, guys—anaphylactic shock, it is. I was also curious to see how Verjuice might work. It was wonderfully fragrant, but disappeared in this dressing. This left me with the two different champagne vinegars that they carry at Andronico’s. Both worked quite well. The Vilux was a bit oakier, while the one in the pretty bottle (by O Olive Oil) had a clean, bright acidity.

To assemble the dressing, add the vinegar, shallots and salt to a bowl and allow it to sit for 15 minutes. Then add the mustard and slowly add the oil, whisking to emulsify. Correct oil/vinegar levels to your preference. Add a sprinkling of grated cheese, and black pepper to taste.

Making the gremolata Shortly before serving, freshly chop and mix the parsley, lemon zest and garlic.

Dressing the salad If you take nothing else from this post, remember to dry the leaves  thoroughly  before dressing. Failing to do so will effectively dilute your dressing 1- to 2-fold in tap water, resulting in salad that my pal Judy repeatedly describes as “insipid.” If you zoom in on the spinach picture above, you can see tiny droplets of water. These can be removed by tossing the leaves with small pieces of dry paper towel.

In a large salad bowl, toss the (now dry) spinach in slightly more dressing than is necessary to wet the leaves. Dust the leaves with chopped almonds, gremolata and cheese. Toss again. Adjust ingredients to your taste.

The salad was definitely a winner in our house. My wife tells me that, combined with the entrée, this may be the best meal I’ve ever made. (The caveat, of course, being that I’m more or less completely new to cooking.) 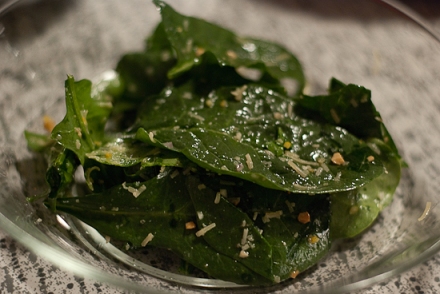 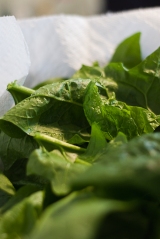 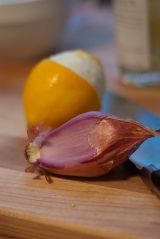 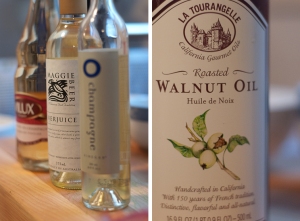 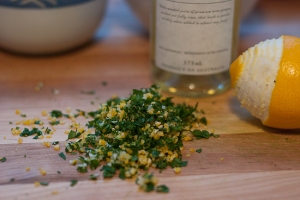 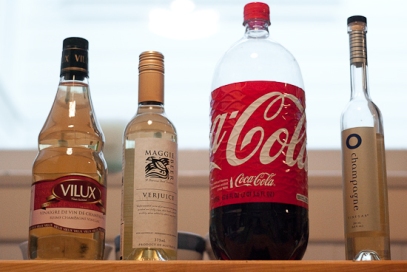